Vision
DAOrayaki is a decentralized media and research organization that is autonomous by readers, researchers, and funders. DAOrayaki represents the community’s will. We believe that information decentralization empowers the people and secures the integrity.
Description 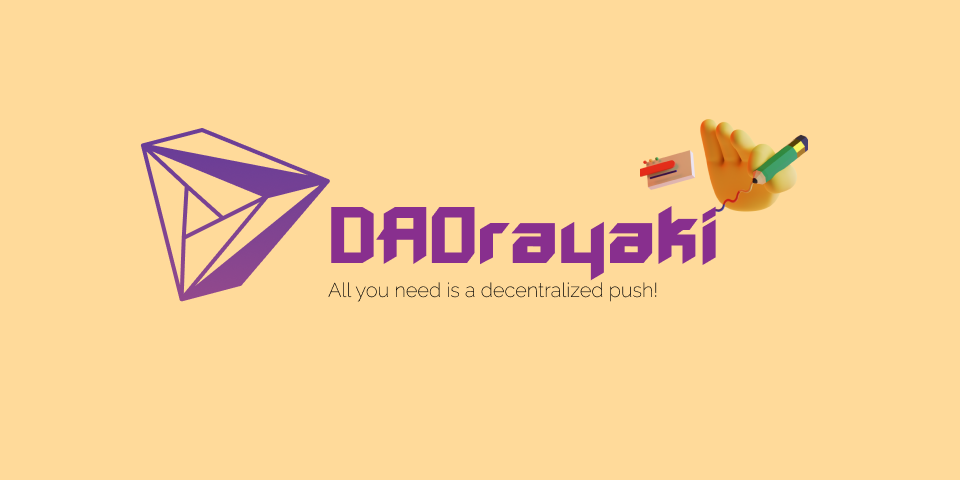 To empower People, We Must Decentralize Information.

First of all, we would like to thank Dora Factory community for believing and granting DAOrayaki in Dora Factory Community QF Round-1, “thank you for putting faith in us!” Where DAOrayaki classed first with the largest matching funding.

After nearly ten months of practice, we are pleased to announce that DAOrayaki will enter the dGov 2.0 era, i.e., the transition from semi-decentralized governance led by decentralized funding and executive committees to decentralized editorial committees and community-committees co-governance.

DAOrayaki is a fully functional decentralized research media that represents the community's will and is controlled by the community. It is initiated by the core community members of DAOONE, which is China's first DAO organization. It receives support from the DAO's infrastructure provider “Dora Factory”.

Decentralized media (dMedia) is a new exploration. There is no clear and reproducible path to how to achieve it. However, one thing is sure: effective dMedia should empower the community while preserving the efficiency and competitiveness of central media(cMedia). Therefore, DAOrayaki defines a fully functional decentralized media, which should include three aspects core functions, extended functions, and edge functions:

Since its establishment in February 2021, DAOrayaki has been gradually practicing the functions of dMedia around the above three aspects. At present, part of the core governance function of dMedia has been initially realized, that is, decentralized funding. Now we will meet new challenges and expand the boundaries of dMedia, i.e., to realize the full decentralization of the editorial board.

Through the form of DAO, DAOrayaki decentrally funds researchers from all over the world to conduct research, translation, and innovative analytics. Therefore, DAOrayaki realized community funding and media management, where the scope of funding includes three types: mechanism research, project reports, and DAO tools. As the figure 👇🏼👇🏼 briefly shows: Each week, the core team (committee) of the DAO handpicks a list of state-of-the-art topics and distributes the corresponding tasks to the contributors community. After the tasks are completed, the articles are submitted to a review group for pre-publication voting. The review group initially consists of 7 DAO fans who are highly involved in DAOs and blockchain infrastructure project governance. The review group then votes for the articles based on a Moloch-like rule. Articles that receive a pass from the review group will be published on the DAOrayaki Articles platforms (daorayki.org). At the same time, contributors will receive community grants. DAOrayaki uses a multi-signature wallet to coordinate funders and research content contributors (DAOrayaki.eth).

In the first phase of DAOrayaki's development, DAOrayaki received the largest matching funding from Dora Factory Community QF Round-1. More than 3500 users contributed to the DAOrayaki grant. After that, it received a total of $47,667 during the Gitcoin GR-11. Thanks to the community's faith! DAOrayaki is considered as one of the top projects, when it comes to Gitcoin Decentralized Governance (dGov) track.

As more and more readers and contributors join the community, it is necessary to further improve the design and implementation of the DAOrayaki governance mechanism to realize credible media with the highest confidence that represents the community's will. We belief that the economics circulation 👇🏼👇🏼 serves the "infonauts community." 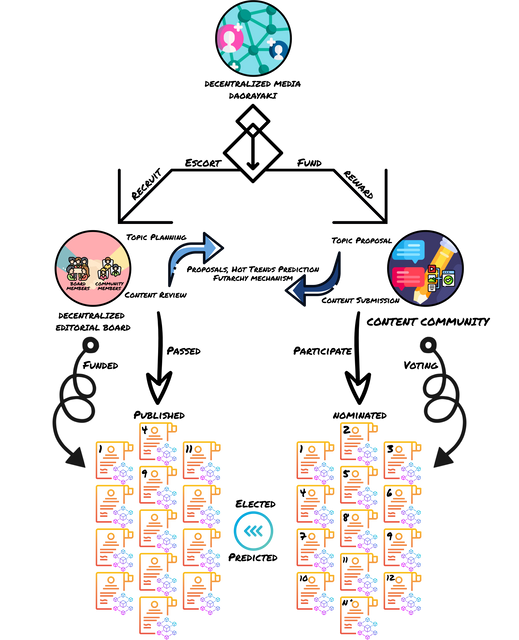 Content governance: This is the core step of the decentralization of the editorial board, that is, it is handed over to the community for topic planning, screening, and review. Community contributors can independently plan research topics and apply for corresponding grants. This process is divided into four stages: As you can see down below, the diagram explains the multiple stages of the "content governance". 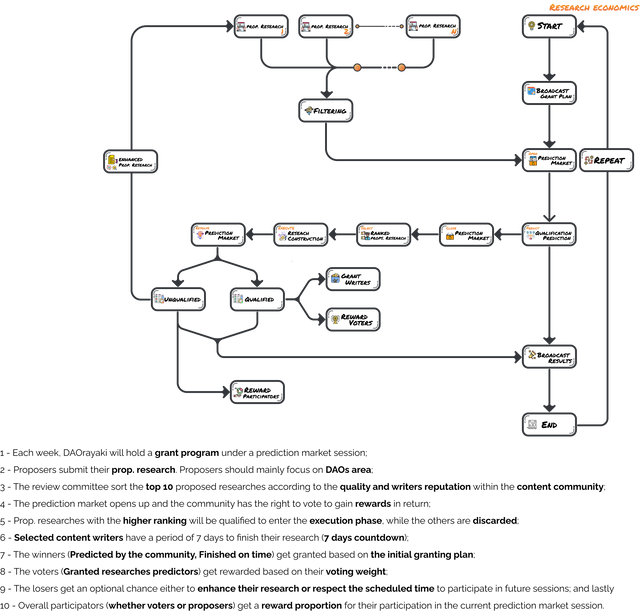 Hot trends prediction: All community members can use the futarchy mechanism to bet on Top N articles in a seven days period (from the opening of the prediction market to the end) and receive rewards. Below our beloved contributors can have a brief understanding on how hot trends prediction works! 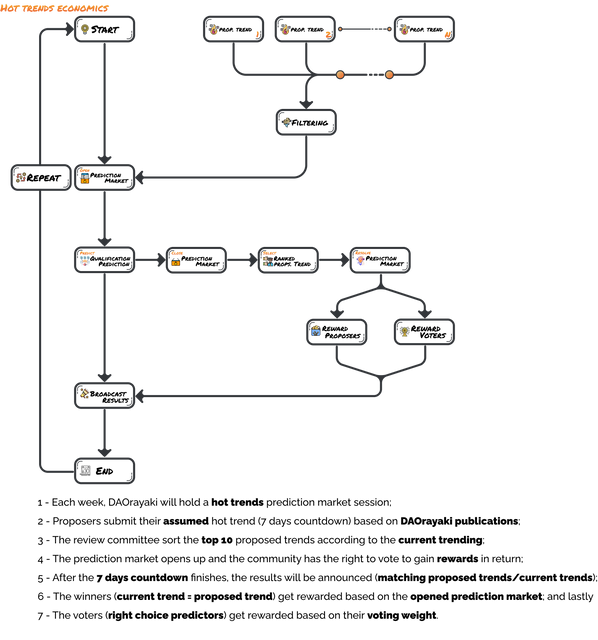 The realization of decentralized funding is the smallest feasible form of dMedia. DAOrayaki's mission is to establish a credible media with the highest credibility that represents the community's will. The decentralized editorial board is another innovative attempt to achieve DAOrayaki's mission. In this governance stage, the power of topic planning and partial review is delegated to the community, and professionals control the final review and publication. It not only exerts the community's creativity but also guarantees the quality and efficiency of the media. The decentralized editorial board will bring new vitality to DAOrayaki, and at the same time, provide new guidelines and ideas for the construction and design of dMedia.

Latest updates Innovate, Inform, Inspire //All you need is a decentralized push!

First of all, as usual we can't go through this without the faith of Dora Factory contributors for believing and granting DAOrayaki in QF-Round 2 once again!, “thank you for putting faith in us!”. DAOrayaki received a total of $35,172 (2,931.92 DORA) in QF-Round 2 grant round! Where DAOrayaki as always ranked first!

After nearly four months of practice, we are here to announce the latest updates within DAOrayaki journey! After entering the dGov 2.0 era, i.e., the transition from semi-decentralized governance led by decentralized funding and executive committees to decentralized editorial committees and community-committees co-governance. DAOrayaki officially launched the required crafts for the decentralized governance under three parts: Prediction markets platform, Articles platform, and Community discussions forum. We believe these crafts are the right choice for the community to go through the decentralized media journey! In addition, DAOrayaki fully implemented and enhance the discord server to be used side-by-side with the discussions forum for an efficient content workspace.

Now we took the brief salutation off the way let's get to the detailed progress! Phase 3: DAOrayaki governance. 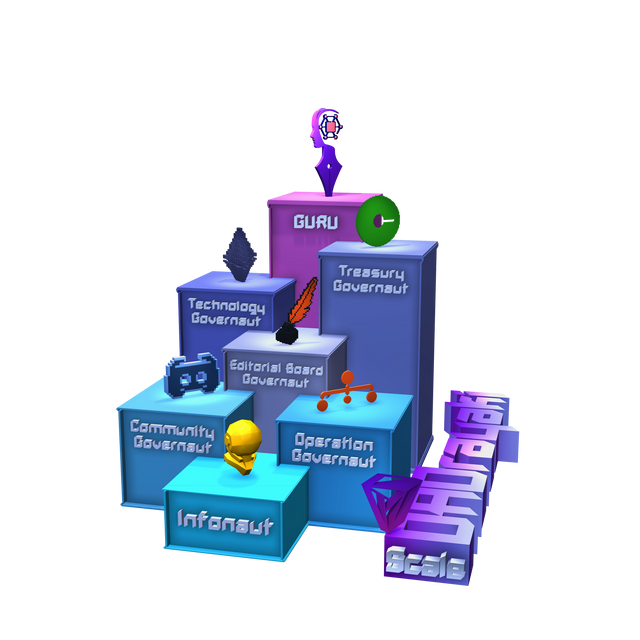 The above governance scale were designed based on a divide and conquer strategy (//His military strategy is to divide and conquer) and a game theory (//If we are not our brother's keeper, at least let us not be his executioner) approach and that is to guarantee the following essential points:


The governance scale clears the way for the community members "DAOrayakers" on how to put their goals within the community, and collaborate on tasks in a flexible way that guarantees fairness and efficiency. Based on their expertises, skills and vows to the community, they will be assigned to the designated governance cell they want to be within. For such a reason, DAOrayaki decentralized governance were enhanced and well re-organized. As we said at the start, "All you need is a decentralized push!"

The following figure represents the details about the governance scale were you can see the various duties and rights within DAOrayaki: 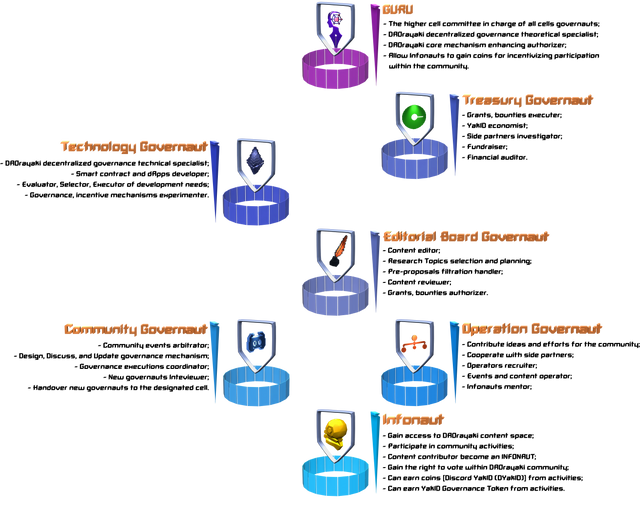 Joining one of 7 cells requires a set of "Digits requirements" and "Skills + Activities requirements" (You can refer to DAOrayaki discord server for more information on this) eventually, after setting up a goal for a certain cell within the governance scale DAOrayakers gathers the needed requirements and they are good to go as a part of DAOrayaki content creation, governance, or even the high-committee members. As we mentioned before, we believe this way guarantees the interactivity and incentivization of the community in addition to a transparent governance model.

Now to accomplish the prediction markets and governance, we need an asset for the utility and circulation. For such a reason, DAOrayaki deployed a non-monetary governance token for its community denoted under the ticker "YAKID" (DAOrayaki + IDentity)

and a virtual asset within the community server base (Discord) denoted as "DYakID" (Discord YakID). Why non-monetary governance tokens?

Governance tokens with non-monetary attributes has no endogenous value, but has governance authority. Such tokens have the following characteristics:


Governance tokens with non-monetary attributes avoid the problems associated with buy-votes to a certain extent. Combined with Futarchy mechanism, it not only guarantees the voting value, but also realizes high-quality participating community. DAOrayaki follows the above strategy with the non-monetary token "YAKID." For the discord virtual asset "DYakID" it is mainly involved in cells recruitment digits requirements, community giveaways, contests and much more!

Let's get back to the content space a bit. Encouragement is a must: Bounties. (//Bounties were paid to colonial producers of indigo dye)

Alongside the prediction markets, DAOrayaki holds Bounties program now as a way of encouragement to the community members, from time to time DAOrayaki editorial board sets a list of bounties that requires to be solved by community members. These bounties include Articles creation, Projects analysis, or Videos/Podcasts explanations. It follows a FIFS standard "First In First Served" with the potentiality of re-claiming by others if a certain bounty was not fulfilled! Through the past months, the team behind DAOrayaki was working as its best to provide the best product possible and expected to achieve DAOrayaki mission! We are constantly implementing, optimizing, and innovating through the journey, as they say "sum small efforts leads to accomplishments." For this reason, we are following the below roadmap, and we are sure with absolute certainty and faith that we are on the right path. So, thanks again to our gitcoin contributors for putting faith on us and making this vision possible to make! We meet next time with other completed quests! 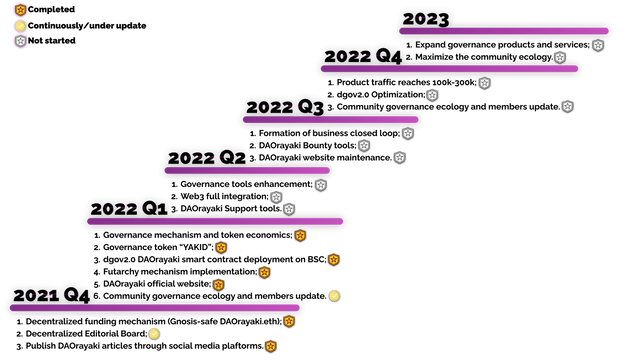 DAOrayaki is initiated by the core community members of DAOONE, which is China's first DAO organization. It receives support from the DAO's infrastructure provider "Dora Factory." At present, DAOrayaki's DAO Committee is composed of 7 DAO fans and has formed a contributors network composed of PhDs, encryption enthusiasts, deep contributors of DAO, OG, and even high school students.